All About Lawn Weeds?

It’s been said that a weed is a plant whose virtues have yet to be discovered. That’s a nice utopian view, but to anyone serious about a good-looking lawn a weed has no virtues. It’s a plant that’s growing where you don’t want it. As an example, bermuda grass is a lawn grass when it grows where it’s supposed to. If you have a zoysia grass lawn and there’s bermuda grass creeping in, then it’s a weed.

Weeds are a fact of life. No lawn is ever going to be completely weed-free. But, if you know what type of weeds you’re dealing with, you can keep them under control and make your lawn look virtually weed-free.

Weeds come in two basic categories. Broadleaf weeds are dandelions, plantain, clover, oxalis, spurge, and so on. They have wide leaves with large veins, and some have flashy flowers. If you live in the northern U.S., you’re probably familiar with all of them. In the southern U.S., clover, wild garlic, wild onion, spurge, and plantain are the most common broadleaf invaders. And dandelions—it seems like they can take up root just about anywhere. 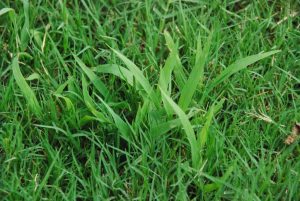 Narrowleaf, or grassy weeds, are crabgrass, quackgrass, creeping bentgrass, Dallis grass, goosegrass, and so on.  If you’re in the northern parts of the U.S., you’ll see the first three. If you’re in the southern U.S., you’re probably familiar with the last two and crabgrass, but the others are definitely capable of invading warm-season lawns as well.

You’ve probably also noticed that weeds don’t all appear at the same time. Some pop their heads up at the beginning of the growing season; others appear later in the year. These characteristics are important to know, as they’ll help you determine how to wage war on these lawn intruders. Some you’ll attack with preemergence herbicides that control weeds before they germinate. Others you’ll hit with postemergence herbicides, which control weeds when they’re small plants or grown in.

In the coming weeks we’ll talk about specific weeds, how to identify them, and how to tackle them, as well as overall turf management approaches that will help make your lawn less welcoming to them from the get-go. A weed free lawn will give you a feeling of pride and accomplishment, and its not as hard as you might imagine.