Characteristics of the EMPIRE Turf® 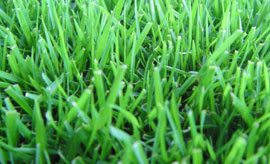 EMPIRE Turf is a Zoysia grass that has truly raised the bar for warm season turf grass. EMPIRE sod combines soft to the touch feel with lush green color and fine, tight blade growth. Visually, EMPIRE is an extremely attractive turf grass for any landscaping job. Homeowners and Property Managers also appreciate its many maintenance, environmental, and cost saving advantages.

You might not expect a turf grass as soft as EMPIRE to be so strong, but this incredible Zoysia grass accomidates a variety of activities without suffering extensive wear and tear. EMPIRE Turf is as hardy as it is attractive, and has a deep, thick root structure that makes it more drought tolerant than other varieties of Zoysia grass, once established. In addition EMPIRE’s slower vertical growth and natural chinch bug and chemical resistances mean that your lawn will require less maintenance, mowing, and water than other types of warm season turf grass. An EMPIRE turf lawn that has been naturalized to the local climate requires minimal irrigation to remail healthy and thriving.

Reduced maintenance needs and durability are EMPIRE’s hallmarks. EMPIRE Zoysia grass was originally developed in Brazil, and thrives in both harsh tropical climates such as Southern Florida as well as more temperate regions as far north as Washington and Pennsylvania. EMPIRE Turf is one of the few grasses rated to perform well in all zones, and it can thrive in varying soils and climatic conditions. Visit EMPIRE’s Where It Will Grow page to see a detailed map of the areas across the United States where EMPIRE Turf will thrive.

Durable enough for professional use, EMPIRE Zoysia is also a favorite of golf courses, theme parks, master planned communities, office complexes and other commercial areas. Homeowner’s and Landscape Professionals agree that EMPIRE Turf is an excellent choice for anyone looking for a beautiful and easy to maintain turf grass.